Art in America | June – July 2006
Christopher Gallego at Seraphin
In the 11 oil paintings and eight drawings in this show, titled “Evocative Realism,”
Christopher Gallego transforms banal subjects such as rubber gloves, potatoes,
and careworn interiors into timeless forms suffused with light. He reveals myriad textures
and colors that are easily overlooked, such as the daylight from a window
reflected in an egg yolk in a green glass bowl, or a muslin-covered mannequin
surrounded by dust-filtered light.
Gallego’s backgrounds are often the plain interior of his studio. Except for an
early figure study in pencil on paper (1998), no human being intrudes,
yet each work radiates human presence. We experience it in the paint-smeared
Drop Cloth (2003-04) that protects a white chest from paint-filled brushes.
The texture of the cloth against the painted-wood furniture plays white against white,
rough against smooth, warm against cool—a visual compendium of light created by color.
A graphite drawing (2002) and a painting (2003-04) both depict a weathered metal
laundry tub, its surface rusted and marred from use. Kitchen (1995-96) is a large
charcoal and graphite study on paper of one corner of a room: cookbooks on a shelf,
wine bottles, knife rack, toaster, electrical cords and a window with a fire escape.
In Bag of Plaster (2000), blue, brown and red patches—logos, symbols and text—
are discernible on a white paper bag, with shadows emphasizing the bag’s bulk
and form against a muted background.
In the manner of Giorgio Morandi, Gallego paints objects that become portraits
of a time and place defying categorization.
– Anne R. Fabbri

Philadelphia Inquirer, February, 2005
Christopher Gallego – Evocative Realism
Seraphin Gallery
Let there be light
New York artist Christopher Gallego’s exhibition at the Seraphin Gallery introduces Philadelphians to a meticulous realist whose drawings and paintings ennoble everyday objects, architectural details, and even empty rooms.
For instance, the show includes a small oil of an egg yolk in a bowl, another of two potatoes, and a third of rubber gloves on a shelf. Larger works, such as a pencil drawing of a copper laundry boiler and a painting of a spattered drop cloth covering a piece of furniture or a radiator, are equally matter-of-fact.
An open sack of plaster doesn’t seem like promising subject matter, yet Gallego’s painting of it makes the homely bag glow like a religious icon. And therein lies a clue to his essential subject matter, light.
As one proceeds through the exhibition, past a large pencil drawing of an empty room and another of a kitchen corner, Gallego’s devotion to light as animating presence becomes evident.
There’s nothing new in emphasizing and even glorifying the fall of ambient light, but Gallego’s technique invigorates the idea and helps one remember that nothing in our surroundings should be dismissed as ordinary.
– Edward Sozanski

New York Times ART IN REVIEW | September 8, 2000
New York Classicism Now | Hirschl & Adler Modern
Maybe there is an important exhibition to be done about the classical impulse in contemporary art. ”New York Classicism Now,” inspired in part by the best-selling author and crusading anti-Modernist Tom Wolfe, is not it. This confusing mix of representational and abstract paintings, drawings and sculptures sheds little light on the nature of, or the need for, contemporary classicism.
The bulk of the show equates classicism broadly with old-fashioned representational painting. Of the artists, 20 have studied (or, in one case, taught) at the New York Academy of Art, a school that specializes in teaching premodern modes of figurative representation. These artists are all competent but unexciting technicians. Their works include Graydon Parrish’s absurdly solemn French Academy-style funeral allegory depicting beefy, grieving male nudes and a dead child on a fancy, antique raft; a glossy, Chardinesque picture of an old electric mixer by John Morra; and Mikel Glass’s deft, Fairfield Porter-style portrait of a man in red long underwear.
The show’s best painters, however, are from other schools. Shoichi Akutsu paints delicate images of pieces of notebook paper taped to studio walls; Christopher Gallego presents three large studio interiors painted with intensely observant sensitivity; and William Kennon makes precise but atmospheric rooftop views from his studio window.
While a definition of classicism that would convincingly embrace all the different styles of painting on view remains in doubt, the situation is further confused by the inclusion of artists who work abstractly or conceptually. There are confectionery color-field paintings by Jennifer Riley and an absorbingly complex geometric structure made of little wooden blocks by John Powers. Kathleen Gilje, a professional painting conservator, makes careful copies of old master paintings, adding incongruous modern elements like tattoos on Leonardo’s ”Lady With Ermine,” and James Drake shows drawn or photographic images based on sign language used by women in Texas prisons. A life-size sculpture of a man in an overcoat holding a shovel was cast in dirt by James Croak.
Conscientious craftsmanship, disregard for ultrahip avant-gardism and rejection of extreme idiosyncrasy characterize most of the works in the show, but surely the idea of classicism should entail something more positively coherent — morally as well as aesthetically — than the puzzlingly eclectic conservativism on display here.
– Ken Johnson 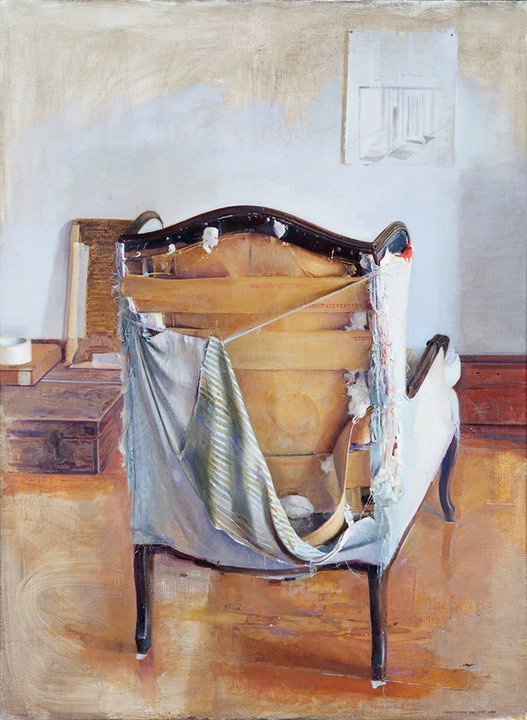